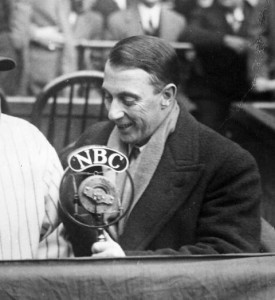 Play-by-play pioneer Graham McNamee was born in Washington, DC, on July 10, 1888. He called such famous events as the Dempsey-Tunney “long count” fight in 1927 and Babe Ruth’s “called shot” homerun in the 19832 World Series. McNamee broadcast numerous World Series, Rose Bowls and championship boxing matches. He also broadcast other important live events, such as national political conventions and Charles Lindbergh’s 1927 arrival in Paris after his solo transatlantic flight. McNamee’s signature sign off was, “This is Graham McNamee. Good night, all.” He continued to voice movie newsreels until his death on May 9, 1942. He was inducted into the NSSA Hall of Fame on April 7, 1964.