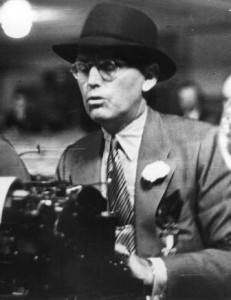 Born in Manhattan, Kansas, on October 4, 1884,Damon Runyon was one of the first great American sportswriters. Runyon got his first newspaper job, with the Pueblo Evening Press, at age fifteen, before enlisting to take part in the Spanish American War. When he returned from the war, he worked for a number of small daily newspapers before becoming a sportswriter with the Denver Post. In 1910, Runyon moved to New York City to work at the New York American, where he covered New York baseball clubs for many years, as well as a number of other sports venues. At its peak, his column had a daily readership of over ten million, and he was known as America’s premier journalist. Runyon’s work was so outstanding that Red Smith said, “Runyon could do things … that made a fellow want to throw his typewriter away.” Outside of sports, Runyon was also an accomplished writer; his works include the book “Guys and Dolls,” which was later reworked into a Broadway musical. Runyon died in 1946. He was inducted into the NSSA Hall of Fame on April 7, 1964.