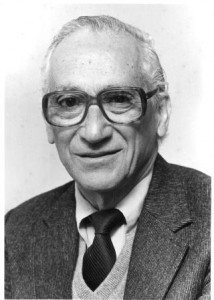 Born in Bar Harbor, Maine, on July 15, 1905, sportswriting legend Shirley Povich wrote for the Washington Post for nearly 75 years. Povich went to work for the Post, as a copy boy, after meeting the Post’s editor while working as a golf caddy, in 1922. Within two years, he had worked his way into the Post’s sports staff, and had his first byline appear in the paper in August of 1924. Then at age 20, he became the youngest sports editor in the country when thePost promoted him. Along with his work as sports editor, Povich’s column “This Morning With Shirley Povich” ran in the paper from 1926-1974. Povich officially retired in 1973; however, he continued to write for the Post until his death in 1998. During his writing career he wrote over 15000 columns, more than 500 of which were filed after his official retirement. Povich won many awards during his career, including the Grantland Rice Award for Sportswriting, in 1964; the J.G Taylor Spink Award, in 1975; and the Red Smith Award, in 1983. He was inducted into the National Sportscasters and Sportswriters Association Hall of Fame on April 9, 1984.