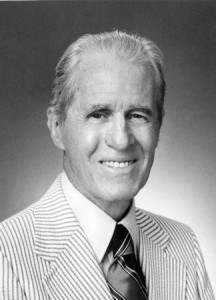 Born in New York, New York, on July 5, 1908, legendary boxing announcer Don Dunphy covered approximately 2000 fights during his broadcasting career, including more than 200 title fights, 50 of which were for the heavy weight championship. Dunphy got his start in radio broadcasting calling Football and Minor League Baseball games, then in 1937, he became Sports Director at WINS/New York. Two years later, in 1939, Dunphy made his first blow-by-blow call of a boxing bout, beginning his more than 40 year career as a boxing announcer. However, it wasn’t until two years later when he joined Gillette, to call Friday night fights, that he burst onto the national scene. Dunphy called fights for Gillette for the next 19 years, before moving to ABC to announce fights on television in 1960. By the 1970’s, Dunphy had retired from network television; however, he continued to call major fights on closed-circuit telecasts until his last bout in 1981. While Dunphy was most famous for announcing boxing, during his career as a sportscaster he also broadcast Yankees games, Cotton Bowls, Track and Field events, Bowling, Basketball, and Horse Racing. Dunphy died July, 22, 1998 following heart surgery. He was inducted into the National Sportscasters and Sportswriters Hall of Fame on April 8, 1986.