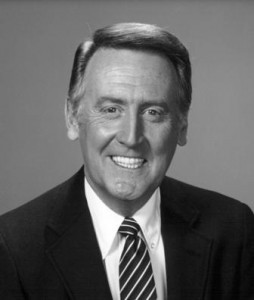 Born in the Bronx, New York, on November 27, 1927, sportscasting legend Vin Scully has been broadcasting Dodgers games for 60 years. Scully began broadcasting Brooklyn Dodgers games in 1950, first on radio and then television, and was behind the microphone for their first and only Brooklyn World Series victory, in 1955. Then when the team moved from Brooklyn to Los Angeles after the 1957 season, Scully moved with them to continue calling their games. In 2010 he entered his 60th season broadcasting Dodgers games, which is the longest consecutive service of any broadcaster to a single team. Along with announcing Dodgers games, Scully also called National Football League games and PGA events on CBS-TV from 1975-1982, and broadcast play-by-play for Major League Baseball’s Game of the Week, three world series, and four All-Star games on NBC-TV from 1983-1989. In all, during his career he has broadcast 25 World Series and 12 All-Star games. For his outstanding sportscasting achievements Scully has been named National Sportscaster of the Year four times, and California Sportscaster of the Year 29 times. Throughout his career he has also received numerous other awards including the Ford C. Frick Award from the Baseball Hall of Fame in 1982. Scully was inducted into the National Sportscasters and Sportswriters Hall of Fame on April 29, 1991.