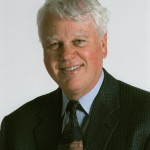 He may be a New Jersey native, but after 41 years at the Boston Globe, Bob Ryan is as much Boston as clam chowder. The Boston College graduate started at the Globe as a summer intern in 1968. Aside from a year and a-half stint as a sports reporter at WCVB-TV in the 80s, he’s been at the Globe ever since.

The author of 11 books, Bob and his wife Elaine live in Hingham, MA. They are the parents of Keith, who served as US attaché to Pakistan before his untimely death at age 37, and Jessica (25), and are the grandparents of triplets Jack, Conor and Amelia.