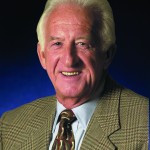 Entering his 41st year behind the mic as a Major League Baseball broadcaster for his hometown team calling play-by-play on WTMJ-Radio and the Brewers Radio Network, Bob Uecker will celebrate his 56th year in professional baseball in 2011. Uecker earned the 2003 Ford C. Frick Award and will forever be recognized in Baseball’s Hall of Fame in Cooperstown, New York. On July 27, 2003, he made one of the most memorable speeches in Hall of Fame induction history as he left his audience, including former President George H. Bush, in tears from laughter. Also in 2003, he became a member of the Brewers Walk of Fame, located near home plate outside of Miller Park. He is one of only 16 people who has received this special honor entering 2011.

Known across the country as “Mr. Baseball,” Uecker has completed 30 seasons as the team’s number one announcer. Uecker is highly respected in the industry, having been inducted into the Radio Hall of Fame in 2001, where he joined such baseball broadcasting luminaries as Vin Scully, Mel Allen, Red Barber, Ernie Harwell and Jack Brickhouse, as well as other American icons such as Bob Hope, Jack Benny, Edward R. Murrow and Orson Welles.