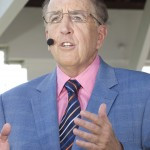 One of the most recognized and prominent voices in the history of sports television, Brent Musburger serves as a host and play-by-play commentator for multiple sports across ESPN and ABC. Musburger primarily works college football and basketball game telecasts, highlighted by Saturday Night Football on ABC since 2006, the inaugural season of the first and only weekly prime time college football series on broadcast television. He has called the Little League World Series every year since 2000.

Musburger joined ABC in May 1990 after 15 years as CBS Sports’ primary host and play-by-play commentator, appearing on The NFL Today, the NCAA Final Four, tennis’ U.S. Open, the NBA and the Masters.

Musburger attended Northwestern University’s Medill School of Journalism before joining the Chicago American. His broadcast career began in 1968 as sports director at WBBM-TV in Chicago. He then moved to Los Angeles as co-anchor of the nightly news at KNXT-TV.