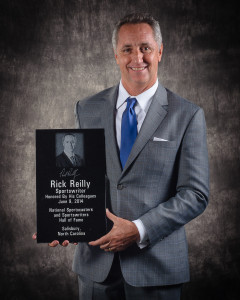 NSSA Hall of Fame inductee RICK REILLY has been voted NSSA National Sportswriter of the Year 11 times. He is a front-page columnist for ESPN.com and delivers human-interest television features for ESPN’s Monday Night Countdown, opinion essays and features for ESPN’s golf coverage, and essays for SportsCenter, which he also occasionally anchors.

Reilly won the 2009 Damon Runyon Award for Outstanding Contributions to Journalism, an honor previously won by Jimmy Breslin, Tim Russert, Bob Costas, Mike Royko, George Will, Ted Turner and Tom Brokaw, among others. Three times his columns have been read into the record in the U.S. Congress. An astronaut once took his signed trading card into space.

He is the author of 11 books, including his latest — Tiger, Meet My Sister… And Other Things I Probably Shouldn’t Have Said (Blue Rider Press).

For two years, he was the host of ESPN’s Homecoming with Rick Reilly, a one-hour interview show which has featured Michael Phelps, John Elway and Magic Johnson, among many others.

The New York Daily News called him “one of the funniest humans on the planet.” Publishers Weekly called him, “an indescribable amalgam of Dave Barry, Jim Murray, and Lewis Grizzard, with the timing of Jay Leno and the wit of Johnny Carson.”

He has written about everything from ice skater Katarina Witt behind the Iron Curtain to actor Jack Nicholson in the front row, from wrestling priests in Mexico City to mushers at the Iditarod, from playing golf with President Clinton to playing golf with O.J. Simpson and back again. He was once President Obama’s fantasy football partner for a week. He has five times had the disagreeable task of accompanying the models on the annual Sports Illustrated swimsuit issue. He was once featured in a Miller Lite ad with swimsuit cover girl Rebecca Romijn (Stamos). In July of 2010, he survived running with the bulls of Pamplona, Spain. Twice.

For nearly 23 years – from 1985 until 2007 — his breezy, hilarious and yet often emotional style graced the pages of Sports Illustrated. For the last 10 there, he wrote the popular “Life of Reilly” column, which ran on the last page. It was the first signed weekly opinion column in the magazine’s long history. He is “the Tiger Woods of sports columnists,” says Bloomberg News.

Reilly is the founder of the anti-malaria effort Nothing But Nets (NothingButNets.net), which had raised over $40 million to hang mosquito nets over kids in Africa, where 3,000 children die every day of the disease. A partnership with the United Nations Foundation, every dollar goes to buying the nets. Wrote the Denver Post, “Nothing but Nets is one charity that scores big.”

Reilly is the co-author of the movie “Leatherheads,” the comic romance centered on the 1924 Duluth Eskimos of the fledgling NFL, starring George Clooney, Renee Zellweger and John Krasinski. It opened on April 4, 2008. MTV called it “a small, unassuming jewel.” And USA Today wrote: “Leatherheads is a real winner.” Part of the movie was filmed in and around Salisbury.

Probably too curious for his own good, Reilly has flown upside down at 600 miles per hour in an F-14, faced fastballs from Nolan Ryan, jumped from 14,000 feet with the U.S. Army Parachute Team, driven a stock car 142 miles per hour, piloted the Goodyear blimp, competed against 107 women for a spot in the WNBA, worked three innings of play-by-play for the Colorado Rockies, bicycled with Lance Armstrong, driven a monster truck over six parked cars, worked as a rodeo bullfighter, and found out the hard way how many straight par 3s he’d have to play before he made a hole in one (694).

Reilly has won numerous awards in his 30-year writing career, including the prestigious New York Newspaper Guild’s Page One Award for Best Magazine Story. He is the co-author of “The Boz,” the best-selling autobiography of bad-boy Oklahoma linebacker Brian Bosworth; “Gretzky,” with hockey superstar Wayne Gretzky of the Los Angeles Kings; “I’d Love to but I Have a Game” with NBC announcer Marv Albert, and the “The Wit and Wisdom of Charles Barkley.”

Reilly began his career in 1979 taking phoned-in high-school volleyball scores for his hometown Boulder (Colo.) Daily Camera while a sophomore at the University of Colorado, from which he was graduated in 1981. He wrote for two years at the Camera, two more at the Denver Post and two more at the Los Angeles Times, before moving to Sports Illustrated in 1985.

Reilly dabbles in magic, piano, mountain biking, SCUBA, back-alley basketball, skiing and snowboarding. He lives in Denver and Hermosa Beach, CA, with his wife — The Lovely Cynthia — and a putter he’s not currently speaking to.