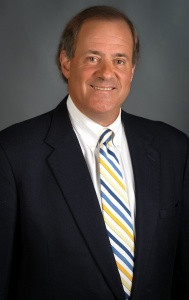 In October 1979 – one month after its inception – ESPN hired a little known 24-year-old sports anchor named Chris Berman. Over the past three and a half decades, Berman has become one of America’s most respected, popular, and in many ways, most beloved sportscasters of his era. A legend in the industry, Berman has also been recognized by the Pro Football Hall of Fame, his peers and countless other organizations for his exceptional contributions to sports broadcasting. With his trademark combination of genuine enthusiasm, knowledge and wit, he has come to embody ESPN in its dedication to entertaining and informing sports fans across the country. He is best known for his signature delivery of highlights in every sport, most notably on NFL Sundays.

Berman received the distinguished Pete Rozelle Radio-Television Award from the Pro Football Hall of Fame in 2010 for his longtime exceptional contributions to radio and television in professional football, an unexpected and humbling honor which Berman cherishes most among a career of achievement.

Berman was named the 2001 winner of the prestigious Reds Bagnell Award from the Maxwell Football Club of Philadelphia for “contributions to the game of football.” Previous recipients include Pete Rozelle, Don Shula, Joe Paterno, and Eddie Robinson, among others. In January 2009, Berman was honored with The Pat Summerall Award at the annual Legends for Charity dinner in recognition of his longtime excellence in football broadcasting. 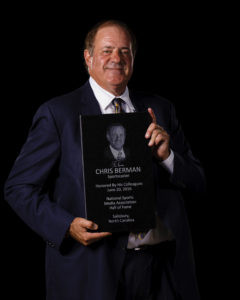 Berman – a veteran of 33 Super Bowls, beginning with the 49ers’ first NFL Championship in Super Bowl XVI – has worked alongside Tom Jackson on Sunday NFL Countdown since 1987, when ESPN first acquired the rights to carry the NFL. The 2015 NFL season is their 29th year working together, which is unheard of in TV, falling just two years short of the longest duo – 31 years – in Johnny Carson and Ed McMahon. Berman and Jackson teamed together every Sunday night in the fall from 1987-2005 to host the critically-acclaimed NFL PrimeTime, which still holds the record as cable television’s highest-rated studio show. Since 2006, they continue to deliver all the NFL highlights to fans during both the 7 p.m. edition of the Sunday nightSportsCenter (with John Saunders and Trent Dilfer) and on “The Blitz” on the 11 p.m.SportsCenter (as PrimeTime moved to Mondays). 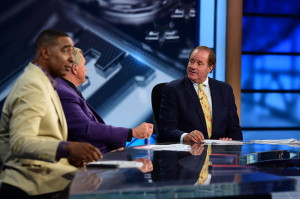 When Monday Night Football moved to ESPN in 2006, so did Berman’s signature weekly halftime highlights trip through the NFL, “The Fastest Three Minutes in Television.” It was a staple on Sunday Night Football for all 19 years (1987-2005), and remains one now on Monday Night Football and Monday Night Countdown. In 2006, Berman traveled to the MNF city each week to host the Monday Night Countdown pre-game, halftime and post-game shows. He continues in that role today from the ESPN studios, and for the fourth year straight serves as play-by-play announcer for MNF’s late game in the opening week doubleheader with Dilfer. In two election years, Berman had the honor of conducting the final interviews with then presidential candidates Barack Obama and John McCain (2008) and President Barack Obama and Mitt Romney (2012) during the MNF halftimes on election eve.

Berman played the role of halftime host for ABC Sports’ MNF from 1996-1999, and he served as host of the Monday Night Blast pre-game show in 1998. He also anchored ABC’s Wild Card Saturday from 1996-2005 and fulfilled the same role for ESPN when the network televised its first Wild Card playoff game in 2015. In 2000, 2003 and 2006, Berman anchored ABC’s Super Bowl XXXIV, XXXVII and XL pre-game shows working alongside the likes of Hall of Fame 49ers quarterback Steve Young and Jackson, two of his regular ESPN partners.

The pre-eminent NFL host, Berman has served as Master of Ceremony for the prestigious Pro Football Hall of Fame Induction ceremony for almost two decades, starting in 1999. The only one he missed was 2009, when he enjoyed the rare and distinguished honor of presenting Buffalo Bills owner Ralph Wilson, Jr. during the enshrinement ceremony, an experience surpassed only by being honored himself with the Rozelle Television-Radio Award in Canton in 2010. He considers these events to be among the most precious and unexpected opportunities of his distinguished pro football broadcasting career. Two others rank with them: being master of ceremonies at Hall of Fame 49ers coach Bill Walsh’s public remembrance at Candlestick Park in 2007, per the Walsh family’s wishes; and providing the impetus for Patriots’ coach Bill Belichick to allow quarterback Doug Flutie to convert a drop-kick in the 2005 season finale. It was the NFL’s first drop-kick since 1941. 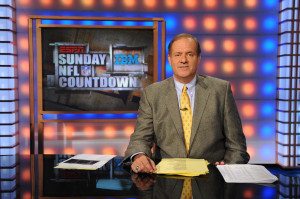 Berman has anchored ESPN’s annual NFL Draft telecast since 1987 and has taken part in the overall coverage of the draft since 1981. His prognosticating alter-ego – the “Swami” – has provided weekly NFL predictions and observations on SportsCenter since ESPN’s very first year in 1979. Berman also hosted ESPN’s two-hour documentary presentation in 2009 of The Greatest Game Ever Played highlighting the legendary 1958 NFL Championship Game between the Colts and Giants.

Since 1990, Berman has served as a play-by-play commentator for ESPN Major League Baseball games, including division playoff coverage from 1996-2006. Among Berman’s career highlights was calling ESPN’s Emmy Award-winning telecast of Cal Ripken’s 2,131st consecutive game September 6, 1995. He has also hosted Baseball Tonight since its inception, the network’s nightly compendium of Major League Baseball highlights, news and features that won a Sports Emmy in 2003. He has covered 30 All Star games, including the Home Run Derby, and 2015 marks his 29th World Series for ESPN, including the 1989 San Francisco Earthquake.

From 1986-2014, Berman covered the U.S. Open, a role that he relished, including the “NFL PrimeTime of golf,” the nightly U.S. Open highlights show. In 2003, he added play-by-play duties for ESPN’s coverage of the first and second rounds of the U.S. Open to his host role.

Always looking to broaden his reach, Berman brought his passion and appreciation for hockey to the 2003 and 2004 Stanley Cup Playoffs as co-host of telecasts on ESPN an ABC.

As a studio host, anchor and commentator, Berman is known for balancing in-depth reporting with ample amounts of humor and ebullience. “Sports should be fun, and I want viewers to share in the enjoyment I get from the games. But I also owe it to those same viewers to be thoroughly prepared and to know what I’m talking about,” Berman said, “or not talking about.” Berman received perhaps his most praise when he and analyst Buck Martinez chose not to speak during the 22-minute celebration in the Ripken game.

Berman is famous for his use of nicknames while voicing over Major League Baseball highlights. Throughout his career he has been praised by the media, viewers and players across the country for his lighthearted and humorous approach. Berman’s personal favorites from the more than 1000 monikers he has coined include Roberto “Remember the” Alomar, Bert “Be Home” Blyleven, Jim “Two Silhouettes On” Deshaies, and Fred “Crime Dog” McGriff , just a sampling of names that often reflect his interest in history and music. Some of his favorite NFL nicknames are Andre “Bad Moon” Rison, Curtis “My Favorite” Martin, Steve “I’ve Got You Babe” Bono and Chris Fuamatu “Bad” Ma’afala.

Berman regularly hosted SportsCenter in ESPN’s first 11 years, culminating in the network’s first SportCenter Emmy Award in 1990. Although his assignments have changed, he always returns to host a few “just to keep DiMaggio’s hitting streak alive.” In 2005, he even took his turn at the anchor desk on the road, kicking off the SportsCenter50 States 50 Days tour from Fenway Park in Boston. Berman established his craft working the overnight shift during ESPN’s first four years, often teaming with his good friend, the late Tom Mees. Berman also appears on ESPN Radio during the football and baseball seasons.

“I want to be George Brett, Cal Ripken, the late Tony Gwynn and the late Walter Payton. I want to retire with the team I came in with. Once I go anywhere else, I’m a mercenary. I’m so proud to be one of the folks who helped lay the foundation here.” To that end, Berman signed a multi-year extension in September 2012. At the conclusion of the current deal, Berman will have worked for ESPN for nearly 40 years.

On May 24, 2010, Berman was honored by the Hollywood Chamber of Commerce with a star on the Hollywood Walk of Fame as a tribute for his more than 30 years contributing to the sports television industry. Five years later, he was inducted into the Cable Hall of Fame.

A long-time aficionado of rock and roll, Berman has appeared on stage singing with Huey Lewis and the News more than a dozen times. In addition, he sang twice with Eddie Money, appeared in a video with Hootie and the Blowfish, and was joined by Glenn Frey of the Eagles for a special “Hotel California” Super Bowl edition of “The Swami.”

Berman is also a golf enthusiast and has played many Pro-Ams on the PGA Tour. Through the years, his professional partners have combined to win 25 majors.

In 1986, while working at ESPN, Berman also provided daily weekday sports commentaries for KFRC-Radio in San Francisco and, in 1987, for WFAN-Radio in New York.

In September of 1999, Berman was honored by his boyhood team, the San Francisco Giants, with the privilege of throwing out the first pitch at one of the final games ever at historic Candlestick Park. He also hosted ESPN’s coverage of the final 49ers game at Candlestick Park, including a post-game ceremony on December 23, 2013. He is proud to say that he’s the only guy East of the Rockies to have a patch of outfield grass from both Candlestick Park and AT&T Park growing in his backyard. 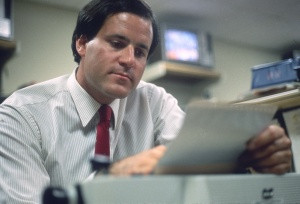 Berman graduated from Brown University in 1977 with a Bachelor of Arts degree in history. His first broadcasting position came while he was a student at Brown as sports director for WBRU Radio and commentator for basketball, football, ice hockey and baseball games. He also assisted NBC Sports telecasts in New England – including the memorable Game 6 of 1975 World Series – and served as a correspondent for WEAN, a Providence, R.I. news radio station. In November 1991, he was inducted into the Brown University Athletic Hall of Fame, and in May 2007 he received an honorary Doctor of Humane Letters degree from his alma mater.

Berman’s first television exposure came in 1979 when he joined WVIT-TV, an NBC affiliate in Hartford, Conn., as a weekend sports anchor.

Berman, born May 10, 1955, resides in his native Connecticut with his wife, Kathy. They have two grown children, Meredith and Doug.