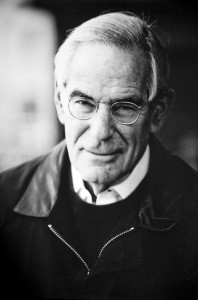 David Halberstam was born in New York City. His father, a surgeon, served in the United States Army, and David and the rest of the family followed him from post to post throughout the years of World War II. In the 1950s, they settled in Yonkers, New York, where David Halberstam ran track and wrote for the school newspaper at Roosevelt High School. At Harvard College, he was managing editor of the student-run daily newspaper, The Harvard Crimson.

Graduating in 1955 with a degree in journalism, he concluded that the most important news story of the years ahead would be the emergent civil rights movement in the American South. Rather than seek a job at a large newspaper in the Northeast as many of his classmates were doing, he took a job at the Daily Times Leader of West Point, Mississippi, to see the drama unfold at first hand. He later moved to the Nashville daily The Tennessean. He credits this experience reporting from the front lines of the civil rights struggle with shaping him as a reporter. In 1960, Halberstam joined the Washington bureau of The New York Times; that January, he covered the inauguration of President John F. Kennedy. Later that year he published his first book, The Noblest Roman, a novel of political skullduggery in the Deep South. Within a year, theTimes sent him as a war correspondent to cover the independence struggle raging in the Congo.

In September 1962, the Times reassigned Halberstam to its Saigon bureau to cover the escalating conflict in Vietnam. Although the official statements of the Pentagon and the State Department insisted that the U.S. and its South Vietnamese allies were winning their war against a communist insurgency, Halberstam found another story when he followed the troops into the field. The insurgents, backed by the communist government in the North, enjoyed widespread support in rural Vietnam, where the U.S-backed Saigon government was deeply unpopular. His reports were denounced by the administration’s supporters as dishonest, if not disloyal, but Halberstam continued to report the story as he saw it. In 1963, he received the prestigious George Polk Award for his reporting from Vietnam, and at age 30 he was awarded the 1964 Pulitzer Prize for International Reporting. The following year he published The Making of a Quagmire: America and Vietnam During the Kennedy Era.

While reporting from Warsaw, Halberstam married the Polish actress Elzbieta Czyzewska, and they tried to make a life together while she continued her career in Poland. Halberstam’s criticism of Poland’s communist dictatorship caused the government to expel the couple from the country in 1967. The pair made a new home in New York City, where she resumed her career. They divorced in 1977. Halberstam married Jean Sandness Butler in 1979.

In the wake of the assassination of Robert Kennedy, Halberstam published The Unfinished Odyssey of Robert Kennedy (1969). More of his observations of the Vietnam War appeared in his novel, One Very Hot Day (1968), and inHo (1970), a study of the durable Vietnamese communist leader, Ho Chi Minh, who had been America’s longtime adversary. Halberstam’s reputation as a major historian was firmly established with his monumental best-seller The Best and the Brightest (1972), in which he traced the path by which a gifted and promising team of political and military experts had led the nation into the greatest foreign policy disaster in its history. The book was a number one best-seller and has had a pervasive influence on many Americans’ thinking about foreign policy for over a generation. Halberstam next turned his attention to the growing concentration of influence in the hands of a few very large media corporations in his 1979 book, The Powers That Be.

In the following years, Halberstam surprised many readers by indulging a lifelong fascination with athletic competition in a series of best-selling books. He traveled with the Portland Trail Blazers basketball team through the 1979 season, an experience described in The Breaks of the Game (1981), and examined a different type of contest inThe Amateurs: The Story of Four Young Men and Their Quest for an Olympic Gold Medal (1985). Over the next two decades, a number of Halberstam’s books evoked the drama of professional sports to mirror larger movements in American society. In his 1989 book Summer of ’49, he chronicled the dramatic baseball pennant race of that year. Like The Best and the Brightest, it was a number one best-seller. In 1995, he published October 1964 about that year’s World Series between the Yankees and the Cardinals. Playing for Keeps: Michael Jordan and the World He Made examined the dramatic growth of professional basketball during the reign of its greatest player. The Teammates chronicled the lifelong friendship of four Boston Red Sox teammates: Ted Williams, Dom DiMaggio, Johnny Pesky and Bobby Doerr. The Education of a Coach, on the life and times of New England Patriots football coach Bill Belichick, was the last of Halberstam’s sports studies.

In other books, Halberstam directly confronted crucial issues facing American society. In The Reckoning (1986), he described the challenge posed to American business and industry by the emerging power of Japan, and the failure of the automotive industry in particular to foresee the changing reality of international competition. In The Next Century (1991), Halberstam examined his country’s dangers and opportunities in the coming century.

A number of Halberstam’s works reflected on historic events he covered as a journalist. His 1993 book, The Fifties, examined the decade of his own coming of age, one he saw as crucial for shaping the America of today. Halberstam later narrated an eight-part television series for the History Channel based on this best-selling book. In The Children (1988), Halberstam followed up on the subsequent lives of four brave African American children he had met as a young reporter when they were the first to integrate their public school. War in a Time of Peaceexamined U.S. military policy during the administrations of President George H.W. Bush and William J. Clinton, the years that fell between the end of the Cold War and the eruption of the struggle with international terrorism. On September 11, 2001, 13 men from Halberstam’s neighborhood fire station responded to an emergency call at the World Trade Center; only one returned alive. In Firehouse (2002), Halberstam recounted the lives and deaths of the men of Engine 40, Ladder 35.

To the end of his life, David Halberstam remained one of America’s favorite authors, most respected journalists and most revered authorities on American life and history in the years since the Second World War. He continued to make his home in New York City, producing a new book roughly every two years. He died in an automobile accident in Menlo Park, California, shortly after his 73rd birthday. His last book, The Coldest Winter, a history of the Korean War, was published shortly after his death.