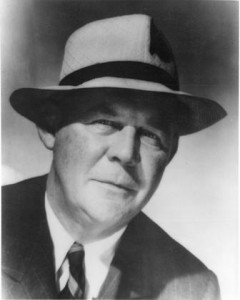 Grantland Rice is a sportswriting legend. Born in Murfreesboro, Tennessee, on November 1, 1880, Rice would go on to have a 53 year sportswriting career, and become known as the Dean of American Sportswriters. He grew up in Nashville, Tennessee, where he attended Vanderbilt University, before getting his first newspaper job at the Nashville Daily News, at the age of 20. During the 1920’s, Rice was known as the “Voice of Sports,” working for a number of newspapers, including the Atlanta Journal, Cleveland News, and Nashville Tennessean, before moving to the national stage in New York City. Rice used a lot of imagery in his work and was famous for dubbing the famous 1920’s Notre Dame backfield “The Four Horsemen of Notre Dame,” a biblical reference to the apocalypse. Rice is also responsible for the saying, “It’s not whether you win or lose, but how you play the game,” which is derived from one of his poems. Rice died in 1954. On April 3, 1962 he was the first person ever to be inducted into the NSSA Hall of Fame.